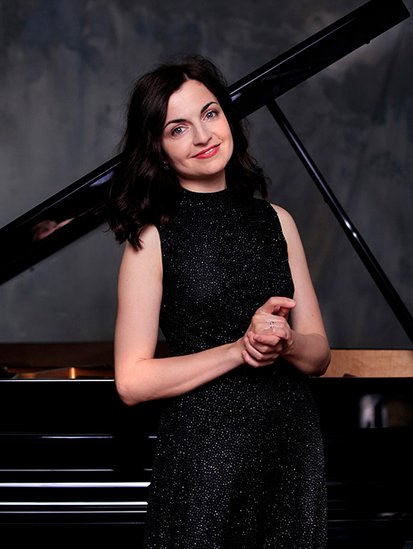 Violetta Khachikyan is a multifaceted concert pianist and acclaimed chamber recitalist who has been described by the Westdeutsche Zeitung as “a true mistress of tone colours”. She was born in Krasnodar in southern Russia and studied under Tatiana Zagorovskaya at St Petersburg’s RimskyKorsakov Conservatory, later attending Konstanze Eickhorst’s class at the Lübeck Academy of Music, where she obtained her concert diploma. Violetta Khachikyan won the European Piano Competition in Bremen and has additionally been awarded prizes at numerous other international competitions, including a second prize at the George Enescu Music Competition in Bucharest, a third prize at the Maj Lind Competition in Helsinki and a further prize at the Scottish International Piano Competition in Glasgow. She has also received advice and encouragement from a number of leading musicians, including Willem Brons, Dmitri Bashkirov, Karl-Heinz Kämmerling, Pavel Gililov, Paul BaduraSkoda and Leon Fleisher. Violetta Khachikyan released her first solo CD in 2007 within the framework of a scholarship from the Lions Club of Germany. Her next CD was a recording of works by Rachmaninoff, Schumann, Scarlatti and Wilfried Hiller made in association with Radio Bremen. A further Solo Album appeared in late 2017 and featured romances and humoresques by Schumann and Theodor Kirchner. The newest CD-project „Fugenpassion“ with the ten romantic Fugues became a lot of positive reviews and was presented in many radio stations in Germany in 2020. Violetta Khachikyan has appeared throughout Europe, Japan and Brazil and has played concerts with the BBC Scottish Symphony Orchestra, the Helsinki Philharmonic, the Bremen Philharmonic, the Philharmonic Orchestra of the Hanseatic City of Lübeck and the Academic Symphony Orchestra of St Petersburg, among others. Recitals have taken her to the Beethoven Festival in Bonn, the Schleswig-Holstein Music Festival, the Aarhus International Piano Festival and the Brahms Festival in Lübeck. As a chamber recitalist she appears regularly with new ensembles in Berlin’s Konzerthaus and Philharmonie and has worked with such eminent musicians as Jens Peter Maintz, Troels Svane, Konstantin Heidrich and Sebastian Klinger. Violetta Khachikyan currently teaches at the Berlin University of the Arts and at the Felix Mendelssohn Bartholdy University of Music and Theatre in Leipzig.