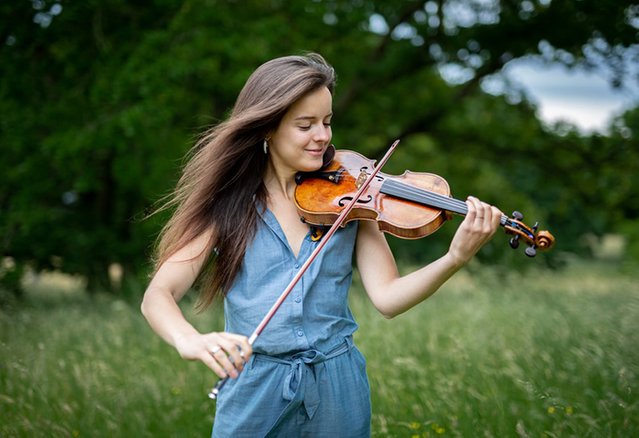 French violinist, Romane Queyras comes from a family of musicians and values the wealth of different cultures. After 3 years with Marianne Piketty at the CNSMD in Lyon, which she ended brilliantly with a DNSPM with honors in chamber music, she went to Berlin for a master's degree at UdK in the class of MoYi and obtained her master in 2017.

There she followed MoYi to Aarhus as a master soloist. In November 2020 she finished her studies, following a recital, in which she was attributed « A refined timbre and elegant technical surplus, which highlighted the uniqueness of the works. Especially the alternating musical expressions convincingly delivered by Romane's subtle mastery of the bow, and the concert became a moving and captivating musical experience with great soloist format.»

France. With her husband Nicolas Sublet, she directs part of the Rencontres Musicales de Haute Provence festival every summer. Throughout her concerts, she has the privilege of playing with renowed artist, among them Nicolas Dautricourt, Raphaël Merlin and Gabriel Le Magadure from the Quatuor Ebène, Alexandre Tharaud, Jean-Guihen Queyras, Antje Weithaas and even Tabea Zimmermann.

She plays an Italian Violin from 1733.