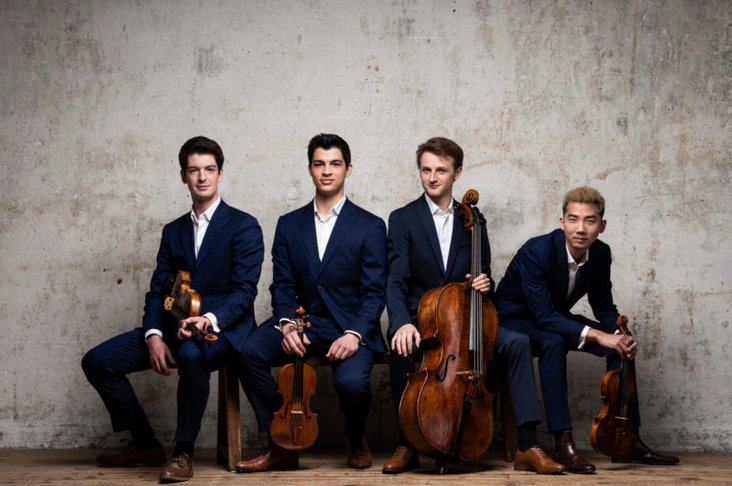 Founded in 2013, the Quatuor Arod benefited from the teaching of Mathieu Herzog and Jean Sulem, as well as the Quatuor Artemis at the Queen Elisabeth Music Chapel in Brussels. They have also worked regularly with the Quatuor Ebène and the Quatuor Diotima. In 2016, they won the First Prize at the ARD International Music Competition of Munich. They had already been awarded the First Prize at the Carl Nielsen International Competition of Copenhagen in 2015 and the First Prize at the European Competition of the FNAPEC Concours in 2014. In 2016, they were HSBC laureates of the Festival d’Aix Academy. In 2017, they were appointed “BBC New Generation Artist” for the seasons 2017 to 2019, and ECHO Rising Star for the season 2018-2019. For the past few seasons, the Quatuor Arod has been performing in the greatest concert halls in France and worldwide: the Philharmonie de Paris, the Operas of Bordeaux and Montpellier, the Vienna Konzerthausand Musikverein, the Berlin Philharmonie, the Amsterdam Concertgebouw, the Zurich Tonhalle, the Wigmore Hall and the Barbican Centre in London, Carnegie Hall in New-York, Bozar Bruxelles, Auditori of Barcelona, Elbphilharmonie in Hamburg, Gulbenkian of Lisbon, the Stockholm Konzerthuset, the Philharmonie of Luxembourg, the Oji Hall of Tokyo, the Salzburg Mozarteum... as well as in Denmark, Italy, Serbia, Finland, Morocco, Israel, the Czech Republic, and China...
The Quatuor Arod also appears in many festivals: Verbier and Montreux, Aix-en-Provence, Menton, Salon-de-Provence, Les Folles Journées de Nantes, Besançon, Heidelberg, Rheingau, Mecklenburg-Vorpommern, Bremen Musikfest, Mozartfest Würzburg, Spring Music Festival of Prague, the Cheltenham Festival...
The Quatuor Arod collaborates with artists such as violists Amihai Grosz, Antoine Tamestit, Timothy Ridout and Mathieu Herzog, pianists Eric Lesage, Alexandre Tharaud and Adam Laloum, the clarinettists Martin Fröst, Romain Guyotand Michel Lethiec as well as cellists Raphaël Pidoux, Kyril Zlotnikov, Camille Thomas, François Salque, JérômePernoo and Bruno Philippe. In 2017, they premiered French composer Benjamin Attahir’s first string quartet (commissioned by La Belle
Saison, ProQuartet and the Quatuor Arod).

The Quatuor Arod records exclusively for the label Erato/Warner Classics with a first Mendelssohnalbum (2017), then a second album, dedicated to the figure of Mathilde Zemlinsky, with the participation of the soprano Elsa Dreisig (Schoenberg, Zemlinsky and Webern/2019) which was awarded with the Edison Klassiek 2020. Their new album “Schubert” is released in 2020 with great public and critical acclaim.
The Quatuor Arod is in residence at the Fondation Singer-Polignac.
The quartet plays instruments kindly loaned from the Boubo-Music Foundation (Switzerland).