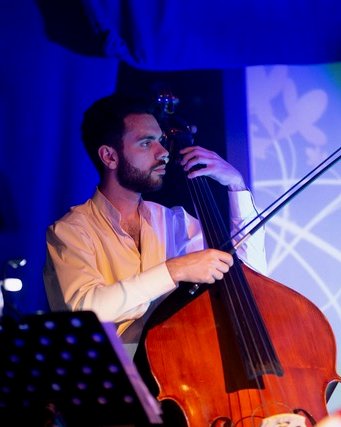 The musical journey started at the young age of nine. Inspired by jazz fusion, he firstly started experimenting with the electric bass, and around the age of sixteen, he transitioned to classical and jazz double bass.

With the musical dream still very present, he invested some time in formal academic education, in order to acquire the essential tools and resources for his musical growth. He studied electric bass, classical and jazz double bass in Palermo Conservatory for seven years with some of the most renowned jazz and classical musicians in Italy and Europe.

During this time, he had the opportunity to work on an experimental final thesis, focusing on music for six-string electric bass. The final result of this project was a first national integral execution of Concerto for Jazz Bass and Orchestra (J. Beal), a written concert for solo acoustic and electric bass and orchestra.

Now, after a Master in jazz double bass in Italy with an exchange in Denmark, Marco is enrolled in a classical education in Denmark.