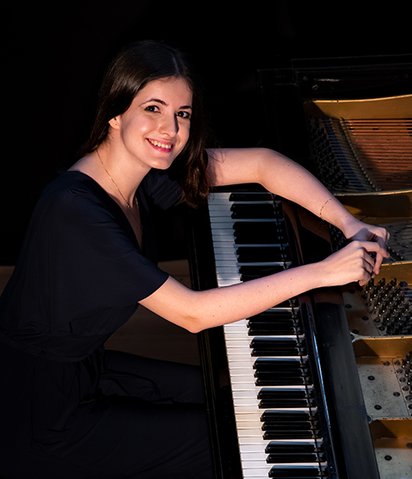 Dina started taking piano lessons from her mother at the age of four. She studied at the Central Music School in Moscow and the Tchaikovsky Conservatory in Moscow under Alexander Mndoyants. As of September 2018, she is studying under Grigory Gruzman at the University of Music Franz Liszt in Weimar. Dina has followed masterclasses by Dmitri Bashkirov, Leslie Howard, Jerome Rose, Leon Fleisher, Awadagin Pratt ,Pavel Gililov,

As a soloist, she has performed with the Thüringer Philharmonie and the Israel Symphony Orchestra, among others. As part of the Career Development Programme offered by Utrecht’s Liszt Piano Competition, Dina is currently engaged in an extensive concert tour as a soloist, including concerts with the Korean Symphony Orchestra in Seoul and the KwaZulu-Natal Philharmonic Orchestra in Durban, South Africa; as well as recitals in South America, the United States, Russia, South Africa and Europe. Dina has also recorded work by composer Sergei Lyapunov for the multiyear cd project Anthology of Russian Music and 2 CDs “ Symbiosis” and “The Boulanger legacy“ with Dutch violinist Merel Vercammen.